Following Alex Caruso’s career-night at the Staples Center against cross-city rivals the Los Angeles Clippers, fans are praying that the Lakers front office choose to retain his talents. Caruso poured in a career-high 32 points, 10 rebounds, 5 assists, and 2 steals, on 52.6% shooting, including 5 from deep.

Through 23 games this season, Caruso is converting in lights out fashion from three-point land (53.3%). In addition, he has shown an ability to get to the free-throw line, on average 2.5 times a game, converting 81% of the time. Shooting was a clear weakness of Caruso’s last season, however this season he has stepped up in an emphatic manner, in search of a permanent NBA contract.

The 25-year-old sophomore dominated down the stretch against the Clippers, showing exactly what he is capable of when confidence is running through his veins. Such performance, paired with the numerous others since being called up from the G-League, has had many fans pleading with the Lakers’ front office to sign Caruso as a back-up option for the point guard position next season.

Alex Caruso has certainly taken a long path to reach his NBA opportunity. Born in College Station, Texas, Caruso attended his local high school, A&M Consolidated. In his senior year, he averaged 18 points and 9 rebounds, being named to the TABC All-Regional and All-State teams, as well as picking up TABC All-Star and district MVP honours.

Opting to stay in Texas, he then took his talents to the collegiate level, committing to the Texas A&M Aggies. Over his four-year career, the 6-foot-4 point guard averaged 8 points, 3.7 rebounds, 4.7 assists, and 2 steals, over 137 games.

The next stage of Caruso’s career was stepping up to the professional level, where he went undrafted in the 2016 NBA draft. During the off-season of that year, Caruso joined the Philadelphia 76ers for the NBA Summer League. In September 2016, he signed with the Oklahoma City Thunder before being waived a short time later. In November 2016, he was acquired by the Oklahoma City Blue of the then NBA D-League.

During the 2016/17 D-League season, Caruso averaged 11.9 points, 3.9 rebounds, 5.2 assists, and 2.1 steals. This earned him a shot with the Los Angeles Lakers in the 2017 NBA Summer League, where he impressed and signed for the team on their first two-way contract. He later became the first player to be called up from the D-League to the NBA via a two-way contract.

Even though he experienced a rocky start to his NBA career, Caruso flourished in the development league (now the G-League) for the South Bay Lakers during the 2017/18 season. Through 29 games, he averaged 19 points, 3.8 rebounds, 7.8 assists, and 2 steals, per game. The following season, he signed another two-way contract with the Lakers.

The Lakers, now with LeBron James, suffered numerous injuries in the middle of the 2018/19 season. Consequently Caruso was called up to the NBA yet again, although he found his opportunities limited under Luke Walton, until the Lakers found themselves out of the playoff race. With the team shutting down their star players for the remainder of the season, this was Alex Caruso’s chance to shine. Well, he has certainly made the most of his opportunity this time round.

Caruso possesses a team-high +4.8 plus/minus in his last 13 games. This statistic beats LeBron James in such category, and records Caruso as being only one of four players on the Lakers’ roster to hold a positive plus/minus. Additionally, he has broken the 15 point barrier on 6 occasions. With one of those being a 23 point outing in a win against the New Orleans Pelicans, and obviously the 32 point masterclass last time out against the Los Angeles Clippers.

Caruso has shown more than enough upside to be the Lakers’ back-up point guard option next season, behind Lonzo Ball. He would be a cheap, viable option for the team, providing them with the flexibility to strengthen in other positions.

Lakers front office, you know what to do. 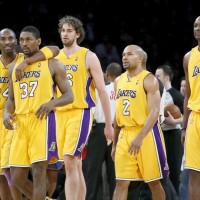 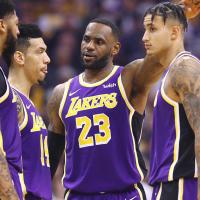